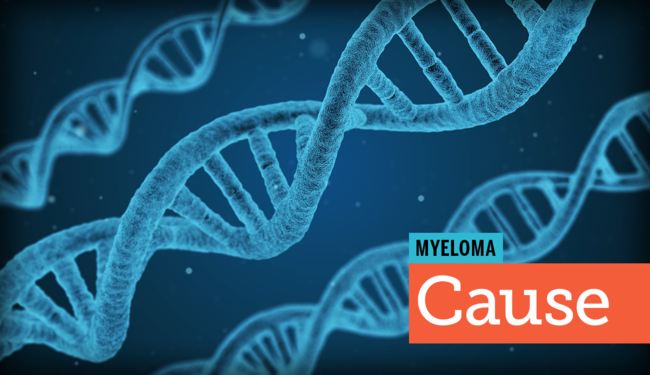 Like all cancers, multiple myeloma is caused by genetic mutations that allow cells to divide and grow in a disorganized way. Normal cells divide in a regular, ordered fashion, forming new cells that are exact copies to replace old cells. Certain genes in each cell are responsible for telling cells when to start dividing. Other genes identify and fix problems in DNA or cause cells with bad DNA to self-destruct rather than to keep multiplying. If a genetic mutation causes one or more of these genes to change, it can lead to cancer. Cancer cells divide without regulation or order, becoming more and more mutated. When these disordered cells begin to invade nearby tissues or break off and migrate to other locations, they are called cancer.

Multiple myeloma develops when a type of white blood cell (a plasma cell) becomes cancerous. Plasma cells reside in the bone marrow and produce antibodies that help the body fight infection. During myeloma, plasma cells develop abnormalities in their genes, leading them to grow out of control and build up in the bone marrow, forming tumors.

Because genetic mutations cause myeloma, risk factors for myeloma include anything that can encourage mutations. Like most cancers, myeloma is not the result of one genetic mutation alone. It requires many different genetic mutations for cancer to develop. Some genetic mutations are hereditary (inherited from parents), and others can be caused by factors in the environment — such as exposure to radiation or harmful chemicals. Scientists believe that in most people, myeloma develops as a combination of environmental factors. Inherited factors can also contribute, but their overall effect on a person’s risk is very small. It is still unclear why some people develop myeloma and some people do not.

Although science is good at finding correlations — or apparent relationships — between factors and diseases, correlation does not prove causation. Many risk factors for myeloma have been identified and are being studied for their role in the development of the disease.

The average risk for any American to develop myeloma is 0.8 percent. Certain factors may increase or decrease this risk on an individual level.

Age is one of the most important factors in myeloma risk. The risk for developing myeloma increases with age. Less than 1 percent of myeloma cases are diagnosed in people under 35. Myeloma is most prevalent in people over 65.

Ethnicity has a significant influence over risk for myeloma. In the United States, Black people are more than twice as likely to develop myeloma as white people. Myeloma is also more prevalent in the Middle East, North Africa, and the Mediterranean region. People of Asian or Pacific Islander backgrounds have a lower-than-average risk for myeloma.

Men are slightly more likely than women to develop myeloma. Researchers aren’t sure what causes this pattern.

Researchers have identified a wide array of environmental factors linked to the development of myeloma. People who have been diagnosed with related disorders, such as monoclonal gammopathy of undetermined significance (MGUS) and solitary plasmacytoma, have an increased risk of progressing to multiple myeloma. A person with MGUS has a 1 percent chance of developing multiple myeloma each year, depending on age.

People diagnosed with MGUS who are obese have a higher risk for progressing to multiple myeloma. However, obesity does not appear to raise the risk for initially developing MGUS.

Having certain chronic health conditions increases the risk of developing myeloma. Conditions that weaken the immune system may allow abnormal plasma cells to grow and become cancerous. Conditions that raise the risk for myeloma include autoimmune conditions such as rheumatoid arthritis, lupus, pernicious anemia, and spondylitis, and viral infections like HIV.

There is limited evidence that taking certain medications may raise the risk of developing myeloma in some people. Drugs that have been linked to increased myeloma risk include erythromycin and phenytoin.

Similarly, people who work with carcinogenic (cancer-causing) chemicals, such as benzene, asbestos, and pesticides, may be more likely to develop myeloma. Occupations that may carry a higher risk for myeloma include farming, firefighting, painting, and roles in the petroleum industry.

Can Myeloma Be Prevented?

There is no certain way to avoid myeloma. Most risk factors, including age, genetic predisposition, and ethnicity, are beyond anyone’s control. If you are concerned you may develop myeloma, focus on lowering your risk by changing the environmental factors within your control. If you work with radiation or carcinogenic chemicals, take every precaution to limit your exposure. Use protective equipment and follow safety procedures consistently. These measures may lower the chances that cancerous plasma cells will form.

General guidelines for cancer prevention recommend eating a healthy diet with plenty of fresh fruits, vegetables, and whole grains, and limiting your intake of red meat and processed meats. A balanced, nutritious diet can also encourage a healthy weight, which may help people with MGUS reduce the risk for progression to multiple myeloma.

If you have been diagnosed with MGUS or smoldering myeloma, attend all scheduled follow-up screenings. Your doctor will use blood tests or urine tests to help determine whether you are experiencing any signs or symptoms of multiple myeloma. Identifying progression as early as possible will give you the best chance for effective treatment.

Kelly Crumrin is a senior editor at MyHealthTeams and leads the creation of content that educates and empowers people with chronic illnesses. Learn more about her here.

How To Get Multiple Myeloma Treatment Without Insurance

Different medications and procedures can be effective for treating multiple myeloma, but they can...

How To Get Multiple Myeloma Treatment Without Insurance

Different medications and procedures can be effective for treating multiple myeloma, but they can...
read article >