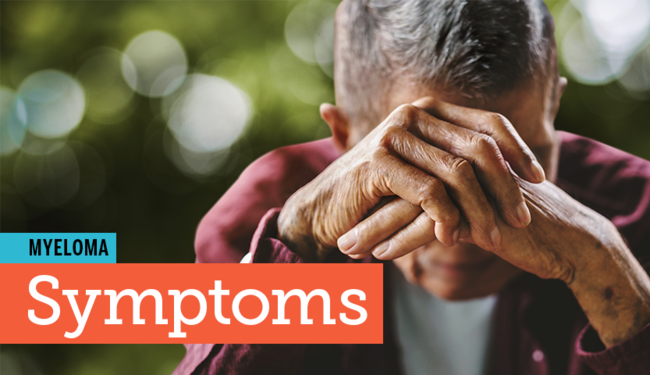 Although multiple myeloma primarily attacks the bones, its effects on bone marrow and the immune system can cause a wide variety of symptoms throughout the body. In many people, multiple myeloma can lead to dangerous complications involving the kidneys.

Early symptoms of multiple myeloma can include back pain, bone pain, fatigue, nausea, or severe infection. Other people with myeloma may not notice that anything is wrong until they experience problems with bone fractures or renal (kidney) function. Early-stage myeloma that doesn’t cause symptoms is known as smoldering multiple myeloma (SMM). SMM may be detected during blood tests for unrelated health issues.

Not everyone with multiple myeloma will experience every possible myeloma symptom. What symptoms someone experiences may depend on what type of myeloma (or related condition) they have. Many symptoms of myeloma can be managed with effective treatment.

In multiple myeloma, abnormal plasma cells (a type of white blood cell) build up in the bones, causing tumors, inflicting damage, and leading to bone pain. Pain in the back, skull, hips, and ribs is common in those with myeloma. Myeloma lesions (tumors) also weaken bone and can lead to fractures. Broken bones often take longer to heal in people with myeloma, so fractures hurt for longer. Some types of fractures, including hip fractures, often lead to chronic pain. Bone lesions in the vertebrae (bones in the spine) can cause the spine to collapse, compressing the spinal cord and causing nerve pain. This is called spinal cord compression.

Learn more about bone lesions, damage, and pain with myeloma.

Posture Changes and Loss of Mobility

Fractures in the vertebrae can cause the spine to collapse, resulting in changes to posture. Advanced myeloma can cause a pronounced stoop and a loss of height. People with bone lesions in the hips may lose mobility as it becomes painful to walk.

In myeloma, kidney damage can be caused by high calcium levels and by large quantities of abnormal proteins. Normal plasma cells secrete antibodies — proteins that protect against infection. Myeloma cells make antibodies that are abnormal and ineffective, called M protein.

More than 50 percent of people with multiple myeloma experience problems with kidney function. About 10 percent of people with multiple myeloma develop kidney failure severe enough to require kidney replacement therapy, such as dialysis. Symptoms of kidney problems include an increase or decrease in urination, intense thirst, weakness, and abdominal pain.

Multiple myeloma compromises the immune system by reducing the number of healthy white blood cells that fight infection. Myeloma treatments can further reduce levels of effective white blood cells and suppress the immune system in other ways. People with myeloma are vulnerable to infections by bacteria, viruses, and fungi that would be easily fended off by those with healthy immune systems. Common colds and the flu can be more severe in those with myeloma.

Platelets are fragments of blood cells that play a major role in forming blood clots. In some people with myeloma, damage to bone marrow lowers the number of platelets (called thrombocytopenia). This uncommonly leads to abnormal bleeding — nosebleeds, bleeding from the gums, and bruising easily.

According to a report in American Family Physician, nearly 3 out of 4 people with multiple myeloma develop anemia (low red blood cell count) as cancer cells crowd the bone marrow where red blood cells are produced. Some myeloma treatments — such as melphalan — further damage the bone marrow, worsening anemia. Red blood cells are responsible for carrying oxygen, which is needed by the body to produce energy. In people with anemia, fatigue can be severe. Anemia may also lead to dizziness, pale skin, and shortness of breath.

Some people with myeloma experience cognitive symptoms, such as memory problems, trouble concentrating, slurring of words, and getting lost in familiar places. Neurological symptoms may be caused by chemotherapy, known as “chemo brain” or “cog fog.” Cognitive issues can also be caused directly by myeloma, as a result of high levels of calcium or abnormal proteins in the blood that interfere with blood flow in the brain. In some cases, people with myeloma may experience seizures or weakness on one side of the body.

Myeloma treatments can damage nerves, leading to neuropathy — pain, tingling, burning, or numbness, often in the extremities. Neuropathy caused by chemotherapy or other myeloma treatments may persist for months after treatment ends. In some people, it is permanent. Neuropathy is not usually a symptom of myeloma itself, but is rather a side effect of treatment.

Hypercalcemia and dehydration can lead to constipation. Kidney damage may cause dehydration and constipation. Many myeloma treatments cause gastrointestinal side effects, such as nausea, vomiting, diarrhea, constipation, and abdominal pain. Some treatments can cause sores in the mouth. The authors of the American Family Physician article wrote that in around 1 out of 4 people with myeloma, gastrointestinal symptoms and side effects may result in weight loss. Other medications, such as corticosteroids, may cause weight gain.

Very rarely, myeloma can cause hyperviscosity syndrome, a condition in which the blood is too thick. This may lead to bleeding problems, tiredness, headaches, chest pain, and shortness of breath.

Myeloma treatments can cause skin problems, such as rashes, itching, blisters, bruising around the eyes, and changes in skin color or texture. Some chemotherapy medications can damage the skin at the site where they are injected.

Edema (swelling) in the face, ankles, legs, and abdomen is a possible symptom of kidney disease. Many people with myeloma experience anxiety and depression, which are common symptoms for all people living with chronic illnesses. Multiple myeloma is cancer that forms in plasma cells (a type of white blood cell that is part of...

Multiple myeloma is cancer that forms in plasma cells (a type of white blood cell that is part of...
read article > If you find challenges that make it hard to stay on your treatment plan for multiple myeloma,...

If you find challenges that make it hard to stay on your treatment plan for multiple myeloma,...
read article >