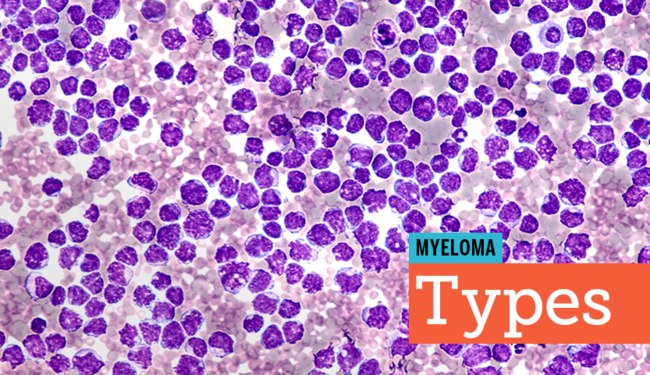 Multiple myeloma is a blood cancer that occurs when one type of white blood cell called a lymphocyte develops abnormalities and grows out of control. Multiple myeloma and its related disorders affect a type of lymphocyte called plasma cells, also known as plasma B cells. Some plasma cell disorders are cancerous conditions, while others are not. In myeloma, abnormal versions of plasma cells are overproduced. They crowd out healthy cells and form tumors. Most tumors form in the bone marrow, causing pain, weakening the bones, and limiting the production of healthy blood cells. In some people, tumors form in soft tissues such as the throat, sinuses, lungs, or muscles.

Some types and stages of plasma cell disorders are mild and asymptomatic. They do not cause any symptoms, do not require treatment, and may never progress to cancer. Other types and stages can be life-threatening and must be treated urgently. Once someone has been diagnosed with a plasma cell disorder, they must be monitored regularly for progression.

Read more about how myeloma is diagnosed.

Researchers believe that mild, asymptomatic types of plasma cell disorders always precede a cancer like multiple myeloma, although they are not caught and diagnosed in every person. However, the precancerous conditions only progress to cancer in a small fraction of people. Many people never progress from a milder disorder to multiple myeloma. Being diagnosed with a mild plasma cell disorder does not mean you will definitely develop multiple myeloma. Having a mild disorder means that, if your condition does progress, regular screenings will ensure that you receive a new diagnosis and treatment as early as possible.

Monoclonal gammopathy of undetermined significance (MGUS) is diagnosed when abnormal antibodies — called monoclonal proteins or M proteins — are found in the blood, usually during blood tests for unrelated conditions. MGUS is not a cancerous condition and does not involve a tumor. People with MGUS have a 1 percent chance each year of their condition progressing to multiple myeloma. People may also progress to other more serious plasma cell disorders, like smoldering multiple myeloma, or to conditions related to abnormal antibodies, like amyloidosis or light chain deposition disease. MGUS is asymptomatic.

The standard recommendation is for watchful waiting instead of treatment for MGUS. People diagnosed with MGUS may undergo blood and urine testing once every six or 12 months to monitor for progression. Doctors classify MGUS as having a low, intermediate, or high risk of progressing to myeloma. However, risk levels can get worse over time. Doctors now recommend that everyone with MGUS, including those with few risk factors, get screened regularly for myeloma.

If routine monitoring shows evidence of progression, your doctor may recommend beginning treatment. Those diagnosed with both MGUS and osteoporosis may take a bisphosphonate medication, such as Aredia (pamidronate) or Zometa (zoledronic acid), to help maintain bone mineral density.

Like MGUS, smoldering multiple myeloma (SMM) is a disorder involving abnormal antibodies in the blood with no myeloma signs or symptoms. Some doctors are now calling this condition asymptomatic myeloma. In some people, SMM progresses to multiple myeloma. People with SMM have a higher risk for disease progression than those with MGUS, although this risk decreases over time:

Rarely, when the abnormal plasma cells of someone with SMM are tested, they show specific genetic characteristics that carry a risk of progression much higher than the average. Some people have a higher burden of abnormal cells than others, as measured by blood tests and bone marrow biopsy. In this subset of high-risk SMM cases, doctors may recommend beginning treatment to delay the progression to cancer. Ongoing clinical trials are helping doctors learn more about which treatments can best improve outcomes for people with SMM.

Researchers believe either MGUS or SMM precede all cases of multiple myeloma.

In cases of a plasmacytoma that is spreading to just a few neighboring sites, the term localized myeloma may be used. Localized myeloma differs from multiple myeloma because the cancer is still confined to one area of the body rather than widespread.

Multiple myeloma is diagnosed when cancerous plasma cells cause widespread problems throughout the body. Bones are the most common site for cancer cells to build up, but tumors in soft tissue (extramedullary plasmacytomas) can also develop. Signs and symptoms of multiple myeloma can be severe and may include:

Multiple myeloma is a dangerous plasma cell disorder. Multiple myeloma currently is not curable in most cases, and it can be fatal. However, it is highly treatable. New multiple myeloma treatment options can keep the condition under control for a long time.

People over 50 and those who are immunocompromised are now eligible to get a second COVID-19...

People over 50 and those who are immunocompromised are now eligible to get a second COVID-19...
read article >

Multiple myeloma is a type of blood cancer that affects plasma cells. Plasma cells are white...

Myeloma is a type of cancer that affects plasma cells. Plasma cells are a part of the immune...

Myeloma is a type of cancer that affects plasma cells. Plasma cells are a part of the immune...
read article >

Extramedullary plasmacytoma (EMP) is a rare cancer that forms from plasma cells (a type of white...

Extramedullary plasmacytoma (EMP) is a rare cancer that forms from plasma cells (a type of white...
read article >

Multiple myeloma is a type of blood cancer that occurs when lymphocytes (white blood cells)...

Living with myeloma can mean navigating through plenty of unanswered questions involving the...

Living with myeloma can mean navigating through plenty of unanswered questions involving the...
read article >

What does myeloma mean to me? The best way to answer this question is to tell my story. First, I...

What does myeloma mean to me? The best way to answer this question is to tell my story. First, I...
read article >